One of the Premier League’s form teams, Chelsea, head to Amsterdam to face Ajax in a pivotal Group H game. Ajax lead the group with two wins from two but Chelsea bagged a big win against Lille last time out and are flying under Frank Lampard. For USMNT fans, there is also plenty of intrigue as Christian Pulisic is on the bench for Chelsea and Sergino Dest is starting at right back for Ajax. With Pulisic likely to come on as a left winger, the U.S. men’s national team stars could be in a direct battle.

Wednesday’s other early kick off sees RB Leipzig host Zenit as the Bundesliga side need of a win to boost their hopes of reaching the last 16 alive. Timo Werner and Co. will fancy their chances but Zenit beat Benfica 3-1 last time out and sit top of Group G.

Below is the schedule for Wednesday’s early games, with both games kicking off at 12:55 p.m. ET.

Click on the link above to follow all of the action live, while we will have you covered with a roundup of the action right here on Pro Soccer Talk.

With Russia hosting the World Cup next year, Putin told a meeting of sports officials that Zenit couldn’t claim to be popularizing soccer as a “truly Russian game” because it didn’t give enough starts to Russian players.

Zenit started against Sociedad with three Russians, five Argentines, a Slovenian, a Serbian and an Italian. Three Russians came on as substitutes.

Russian league games allow seven non-Russians on the pitch at any time.

To say it’s do-or-die for some UEFA Champions League sides in the group stage of this 2015-16 tournament is a bit harsh, but only a bit.

And for some, like Arsenal, it’s the absolute truth. A loss for the Gunners to Bayern Munich — hardly unexpected — would leave them 0-for-3 in group stage games with a visit to the Allianz Arena still to come.

Aside from the home field advantage provided by the Emirates Stadium, things don’t bode well for the Gunners. The opponents have both faced Olympiakos and Dinamo Zagreb. Arsenal is 0-2, having allowed give goals. Bayern is 2-0, scoring eight and not conceding a single tally.

The winner of this battle will be alone in Group F’s second place, and both are dreaming of the knockout rounds after taking care of Arsenal earlier in group play.

This is a brutal and tricky trip for the Blues, probably the most difficult to navigate fixture of Group G outside of the other three clubs’ trips to Stamford Bridge. Chelsea enters the match in third place, but will fancy its chances to take all three points from Andriy Yarmolenko, Niko Kranjcar and Dynamo.

The Israeli side is another club on the brink after starting 0-2 and failing to score a goal. Going to Porto is no cakewalk for any club, and Maccabi could find the end of Tuesday with very little hope of advancing to the knockout rounds.

Don’t mess with Hulk and Danny (and Javi Garcia… and Axel Witsel). The Russian powers are off to a great start in Group H, and can essentially seal its fate in the knockout rounds with a win.

Fancy Valencia’s chances here, though Gent has been valiant both its defeat at Zenit and home draw versus Lyon.

[ UCL: Bale out for Madrid | No Robben for Bayern ]

Neymar has filled the void of Lionel Messi, inasmuch as filling the shoes of the best player in the world is possible. But Barca’s Belarusian opponents present a hostile place to play, having knocked off Roma this season and Athletic Bilbao last UCL season.

Bayer Leverkusen vs. AS Roma

The Serie A side had its chance to lick its UCL wounds, having fell at BATE and drawn at home against Barca. Now it needs a big road result against Bundesliga opposition, an enemy that plays quite well at home. 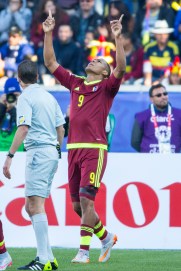 The Baggies are going back to Eastern Europe for another record signing.

One year after breaking its transfer record in buying Brown Ideye from Dynamo Kiev for $17.1 million, West Bromwich Albion has moved to Russia for Zenit Saint Petersburg’s Salomon Rondon.

This time, it’s going to cost them about $18.7 million, and could be the next step in the sale of Saido Berahino, who has been consistently linked with Tottenham Hotspur amongst other suitors. West Brom has also added Rickie Lambert to their striker stable, which includes Ideye and Victor Anichebe.

Rondon, a six-foot-2 striker, turns 26 next month. He scored 20 goals in 44 games for Zenit en route to the Russian double, also scoring the goal in Venezuela’s 1-0 win over Colombia at this summer’s Copa America.

“He’s got a fantastic goalscoring record in some of the top leagues in Europe and for his country,” says Pulis. “He’s 25 years of age and still to fulfil his full potential.“We hope he hits the ground running of course but understand it might take him time to settle. I’m sure our fans will help him and get behind him.“But we feel with age on his side and the prices English clubs are asking for their players, it’s a deal worth doing.

A center forward, he’s scored 20 goals in back-to-back years. Before that, he netted 27 goals over two years at Malaga.

Ideye scored 7 goals in 30 matches for the Baggies last season, growing his production once Tony Pulis took over at West Brom.

The Baggies open their Premier League season later Monday against Manchester City. Rondon won’t be in the lineup, but will Berahino? Will the price of young English players often inflated, the Baggies will likely cash in soon.

It’s theater of the absurd and, at least for this writer, it’s very very funny.

A giant, wide-eyed version of the cartoon character makes his way through FC Zenit headquarters, meeting with Andre Villas-Boas and Axel Witsel along the way.

Watch the video below:

It’s pretty great, and even had some wiseacres altering the roster section on FC Zenit’s Wikipedia page. West Brom adds striker, breaks transfer record for second-straight season; What does it mean for Berahino? August 10, 2015 11:58 am

Russian match called off after goalkeeper hit with flare November 17, 2012 9:03 am